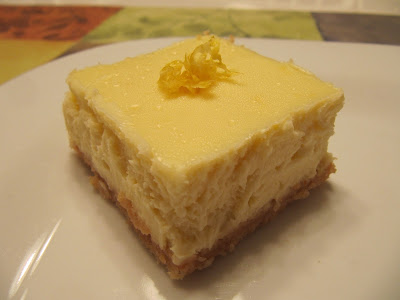 A perfect little bite for Easter.  Delicious.   Plus, the recipe was super easy.

Beat cream cheese, sugar, lemon zest, juice, and vanilla with mixer until well blended.  Add eggs, 1 at a time, mixing after each just until blended.  Pour over crust.  Bake at 350º for 20 to 25 minutes until center is almost set.  Cool completely.  Refrigerate at least 3 hours.
Posted by ThePharmGirl at 11:47 PM No comments:

Email ThisBlogThis!Share to TwitterShare to FacebookShare to Pinterest
Labels: dessert 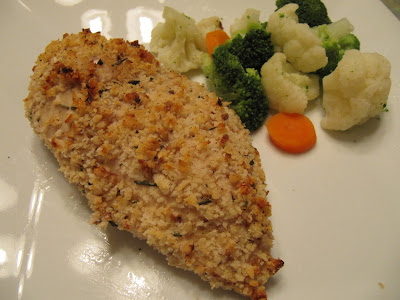 Just a simple and quick weekday dinner.   I was browsing my cookbooks for a recipe and this one caught my eye because I already had all the ingredients on hand.  Perfect.  It was tasty.  No complaints.  I used regular chicken breasts instead of cutlets and increased the cooking time accordingly.

Directions:
In a shallow dish, whisk together the buttermilk and mustard.  In another shallow dish, combine all the dry ingredients.   Add chicken to buttermilk mixture, turning to coat.  Dredge chicken in panko mixture and place on a large baking sheet fitted with a wire rack.  Coat chicken with cooking spray.  Bake at 425º for 13 minutes or until chicken is done (internal temperature reaches 165ºF).  For a larger chicken breast, bake 25-30 minutes.
Posted by ThePharmGirl at 8:39 PM No comments:

Roast Rack of Lamb with Whiskey Sauce, Asparagus, and Potatoes 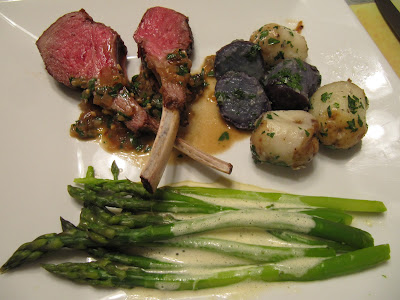 It's time for another St. Patrick's Day meal.  I thought about making the traditional corned beef and cabbage, but decided on an elegant rack of lamb instead.  It was much pricier than I had imagined, but it's fun to splurge on new and exciting ingredients once in awhile.  Luckily, I cooked it to perfection and it was delicious.  The sauce was unnecessary because the lamb was tasty enough on its own.  The asparagus recipe was fine and the sauce was good. 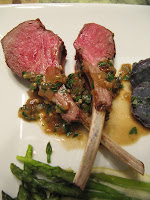 Directions:
Adjust oven rack to lower-middle position, place a rimmed baking sheet on the rack, and preheat to 425º.

Pat lamb dry with paper towels and season generously with salt and pepper.  Heat oil in a large skillet over medium-high heat until just smoking.  Carefully lay the lamb in the skillet, meat side down, and cook until well browned, 3 to 4 minutes.  Reduce heat to medium, and, using tongs, hold the rack upright to brown the bottom, 2 to 3 minutes longer.  Transfer the lamb to the hot baking sheet in the oven and roast for 12-15 minutes until the center reaches 125º on an instant-read thermometer (for medium-rare).  Transfer lamb to a carving board, tent loosely with foil, and let rest for 5 minutes.

Meanwhile, pour off all but 1 teaspoon of the fat remaining in the skillet and return to medium heat until shimmering.  Add the shallot and rosemary and cook until softened, 2 to 3 minutes.  Stir in the garlic and cook another 30 seconds until fragrant.  Stir in the flour until incorporated.

Off the heat, slowly stir in 1/4 cup whiskey, scraping up any browned bits, and let sit until bubbling subsides, about 1 minutes.  Carefully return skillet to medium heat and simmer until whiskey has almost completely evaporated, 2 to 3 minutes.  Stir in the broth and continue to simmer, stirring occasionally, until the sauce has thickened slightly and reduced to 1/3 cup, 3 to 5 minutes.

Off the heat, discard the rosemary sprig and whisk in the remaining tablespoon whiskey, parsley, butter, lemon juice, and any accumulated lamb juice.  Season with salt and pepper to taste.  Cut the lamb racks into individual chops by slicing between the ribs, and serve with the sauce.

from Mastering the Art of French Cooking 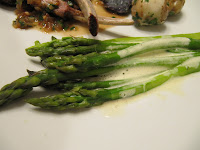 Directions: (in my own words because Julia Child's explanation is lengthy)
Rapidly boil a few quarts of salted water.  Add peeled asparagus and bring back to boil.  Reduce heat and simmer, uncovered, for 12-15 minutes.  When asparagus is tender and has a little bend to it, drain water and remove asparagus to a paper towel to dry.

While asparagus is cooking, make sauce.  Boil the wine, shallots, and seasonings over medium heat until the liquid has reduced to a couple tablespoons.  Let cool a little.  Combine in a blender or food processor with egg yolks until thick.  Heat butter in saucepan until hot and foaming.   Give the processor a quick pulse to re-blend egg mixture and then very gradually, add the melted butter in a slow steady stream while mixing until sauce thickens.  If desired, add more parsley or tarragon.  Serve immediately. 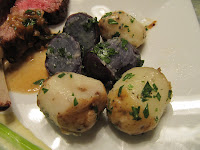 Directions:
Bring an inch or two of salted water to a rapid boil.  Add potatoes and bring back to boil.  Reduce heat, and simmer, covered, for 20 to 25 minutes.  Drain water.  Add butter, parsley, and salt and pepper to taste, and mix to coat potatoes.
Posted by ThePharmGirl at 3:23 PM No comments: 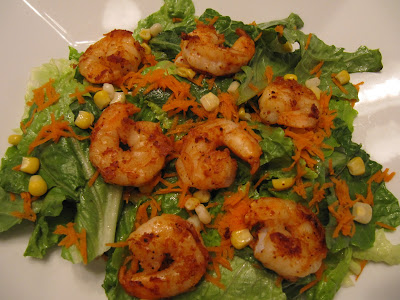 I decided to make a fast meatless Friday lunch with whatever I happened to have in the freezer/fridge.   I found this recipe in a Cooking Light cookbook and made enough just for myself and omitted the ingredients I didn't have on hand (bacon, avocado, tomato).  It was delicious, but I bet it would have been even better with the extra ingredients.  I liked the dressing for the lettuce.

Directions:
Cook bacon in a large skillet over medium heat until crisp.  Remove bacon from pan; cut into bite-sized pieces.  Wipe pan clean with paper towels.  Sprinkle shrimp with paprika and ground black pepper.  Coat pan with cooking spray and add shrimp.  Cook 2 minutes per side or until done.  Sprinkle with a little salt to taste.

Whisk together the remaining 1/8 teaspoon salt, lemon juice, oil, and mustard in a large bowl.  Add lettuce and toss to coat.  Arrange lettuce on each of 4 plates.  Top with about 6 shrimp, 1/2 cup tomatoes, 1/4 cup carrot, 1/4 cup corn, 2 avocado wedges, and bacon pieces.
Posted by ThePharmGirl at 2:06 PM No comments: 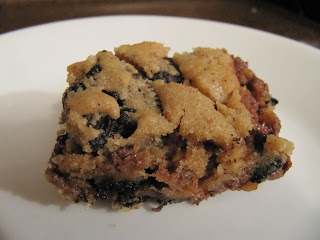 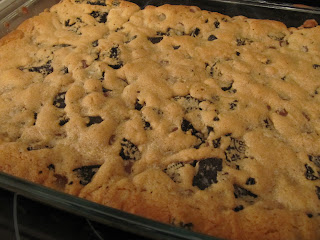 We had an Oreo Cookie Party to celebrate the 101st birthday of Oreo and everyone signed up to bring various Oreo desserts.  I wanted something different from Dirt Cake and also something that didn't have to be refrigerated, so I found this recipe online.     I made a double batch and my coworkers had gobbled it up with 24 hours, so it must have been good.

Place butter and sugars into a large bowl, cream until well combined. Add peanut butter, mixing to combine. Add egg and vanilla, mixing well.  Add flour, baking soda and salt, mixing until dough forms. Add chips and Oreo cookies, stirring until just combined. Transfer dough to an 8x8" baking dish coated with cooking spray, pressing dough evenly into pan.  Bake at 350º for 30-35 minutes or until golden brown and cooked through. Remove and let cool for 45 minutes before cutting into squares. Serve with milk and enjoy!
Posted by ThePharmGirl at 9:57 PM No comments: 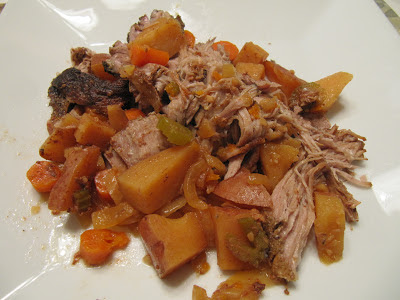 This recipe wasn't necessarily bad, but it wasn't as good as I was hoping for.  It was supposedly a "light" recipe.  The apple juice really saturated the potatoes, making them sweeter than we liked.   I would have been better off with chicken stock.   Also, the recipe lacked seasoning.  I added salt and pepper to our leftovers which helped it out.

I can't find the recipe I used online, but it was like this:

Chop up some potatoes, carrots, celery, and onions.  Throw them in the slow cooker.  Pour 1/2 cup apple juice concentrate over everything along with salt, pepper, and cinnamon.

Rub salt, pepper, and ground cinnamon all over the pork butt.  In a large skillet with a little olive oil, get a quick sear on all sides.  Place it on top of the veggies in the slow cooker.  Cook on low heat for 8-10 hours.
Posted by ThePharmGirl at 9:43 PM No comments: