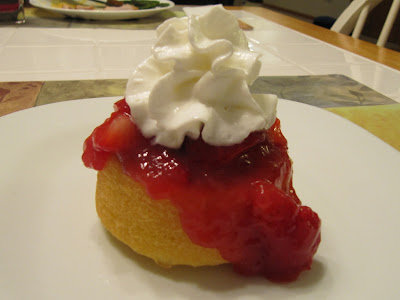 Strawberries were on sale at the grocery store, so this was our dessert last night.   I loved it.  It was fast and easy to prepare.  Jeremy said he wanted a cookie instead (eye roll).   But I thought it was delicious and as a bonus, very low-calorie for dessert.

Directions:
In a small saucepan, combine sweetener, cornstarch, and juice and whisk well.  Bring to a boil and stir constantly, about a minute or two, until mixture is thickened and bubbly.  Remove from the heat and stir in the extract.  Let cool and combine with strawberries.   Cover and chill for 30 minutes.

To serve, spoon strawberries over dessert shells and top each with 2 tablespoons of whipped topping.
Posted by ThePharmGirl at 11:06 AM No comments: 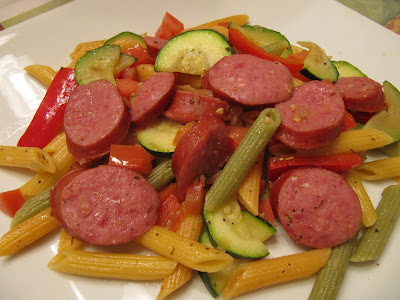 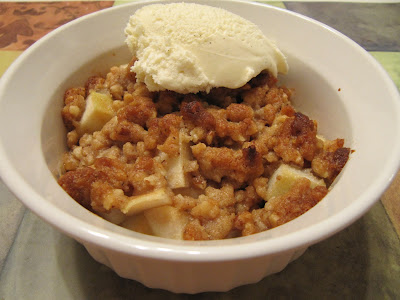 I decided to make something with Polish Sausage for Jeremy, and came up with this recipe using various vegetables and penne pasta.  I thought it was quite tasty.   For dessert, I made a recipe I found in the Cooking For Two Cookbook for Pear Crisp.  Super yummy!  The pears were juicy and the topping was crispy.  Perfect. 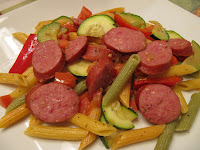 Directions:
Cook the pasta according to package directions; drain.  Meanwhile, in a large skillet, heat oil over medium-high heat.  Add onion and garlic and cook for 1 minute.  Add kielbasa; cook until onion is tender, stirring frequently.  Add zucchini, bell pepper, Italian seasoning, and crushed red pepper.  Cook and stir for 5 minutes.  Stir in the tomatoes and cooked pasta and cook until heated through. 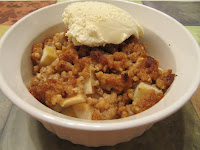 Directions:
Adjust an oven rack to the lower-middle position and heat oven to 425ºF.   Whisk together 1 tablespoon of the sugar, cornstarch, lemon juice, and salt in a medium bowl.  Gently toss the pear chunks with the sugar mixture and divide evenly between two 12-ounce ramekins.

In a medium bowl, mix together the nuts, flour, brown sugar, remaining tablespoon of granulated sugar, cinnamon, nutmeg, and a pinch of salt.  Drizzle the melted butter over the top and combine until the mixture resembles crumbly wet sand.  Sprinkle topping over the pears. Place the crisps on a rimmed baking sheet and bake 20-25 minutes until the filling is bubbling and the topping is a deep golden brown.  Let the crisps cool on a wire rack for 15 minutes before serving.

Posted by ThePharmGirl at 9:43 PM No comments: 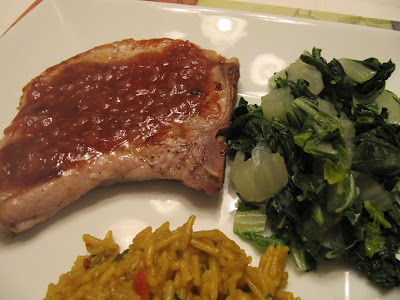 I felt like making pork chops, so I used this recipe from one of my cookbooks.   The chops were good but I wasn't a huge fan of the sauce.   It may be partly due to the fact that I didn't have any red currant jelly on hand so I substituted plum jam.  Not really the same thing, but I thought it was still be a sweet fruity flavor that would work.  I guess not as well as I thought.  I paired the chops with sauteed bok choy and Thai rice.  For dessert, I made a papaya-kiwi smoothie which was a massive gross disaster and I'm not going to bother posting that recipe at all.

Add shallot to pan and cook, stirring constantly, until softened, about one minute.  Add wine and bring to a boil, stirring constantly.  Boil until reduced to about 2 tablespoons, 2-3 minutes.  Whisk cornstarch and vinegar together in a small bowl and whisk into the sauce.  Cook, stirring until thickened, about 30 seconds.  Remove from the heat and stir in the jelly, sugar, mustard, and any accumulated juices from the pork chops.  Serve the pork with the sauce.
Posted by ThePharmGirl at 11:10 AM No comments: 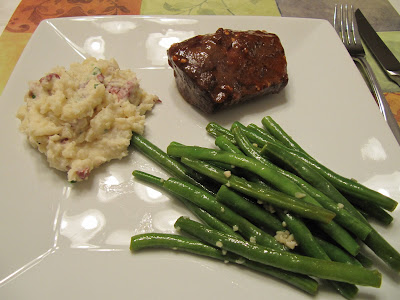 I've never cooked venison before.  Jeremy's sister, Val, generously gave us a couple steaks from the deer she bagged last hunting season, and I was excited to give them a try.  We assume it was some sort of loin cut.  This was a good recipe.  The marinade helped keep the meat from getting too dry.     The potatoes and green beans were a nice accompaniment and tasty as well. 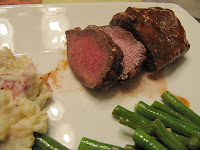 Directions:
Place venison in a large Ziploc bag.  In a large bowl, whisk together the remaining ingredients.  Pour half of the marinade into the Ziploc with the venison; seal bag and turn to coat.   Store both the marinating venison and the extra marinade in the refrigerator overnight.
Discard marinade from the steaks and broil steaks 3-4" from heat for 4-5 minutes.  Turn and baste with reserved marinade; broil 4-5 minutes longer.   Let rest a few minutes before serving. 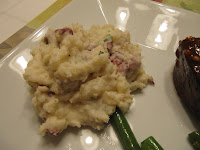 Directions:
Bring the potatoes, 1/2 teaspoon salt, bay leaf, and 2 quarts water to a simmer in a medium saucepan, and cook until tender, about 15 minutes.  Reserve 1/2 cup of the potato cooking water, then drain the potatoes.  Return the potatoes to the pot, discard bay leaf, and let the steam escape for a couple minuets.
Meanwhile, mix together the softened cream cheese and melted butter in a small bowl until smooth.  Stir in 2 tablespoons of the reserved cooking water, 1/4 teaspoon salt, 1/4 teaspoon pepper, and chives.
Using the back of a wooden spoon, smash the potatoes enough to break the skins.  Fold in the cream cheese mixture.  Add more cooking water, a tablespoon at a time as needed, until the potatoes are the desired consistency.  Season with salt and pepper to taste. 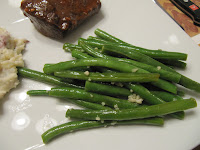 Directions:
Microwave the garlic, oil, and sugar, uncovered, in a small microwave-safe bowl until the garlic is softened, about 30 seconds.  Heat 2 teaspoons of the mixture in a large skillet over medium heat until shimmering.  Add the green beans and water, bring to a simmer, cover, and cook until bright green, about 3 minutes.  Add the remaining garlic mixture and continue to cook, covered, until the green beans are almost tender, another 3 minutes or so.  Uncover and cook, stirring occasionally, until the beans are spotty brown and the garlic is golden, 3 to 4 minutes.  Off the heat, stir in the vinegar, and season with salt and pepper to taste.


Posted by ThePharmGirl at 10:23 PM No comments: 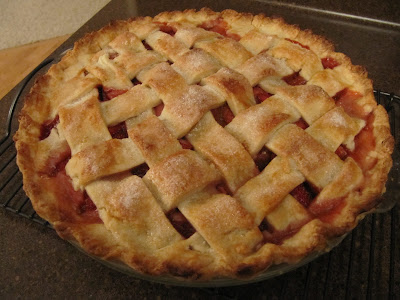 Along with the Lemon Cheesecake Bars I made for our extended family's Easter dinner, I also felt like making a fruity pie with a lattice top since I haven't attempted it yet.  I settled on Strawberry-Rhubarb.  It's a little too early for the rhubarb crop this year, so I just used frozen rhubarb.  I could have done better with the latticework on the pie.  The strips kept breaking.  I think I needed a little more water in the dough or perhaps I just needed to keep the dough in the fridge a little longer.    But overall, not bad for my first attempt.  Jeremy thought it could have used more sugar, but I thought it tasted good the way it was.

Directions:
To make the dough, process the flour, salt, and sugar in a food processor until combined.  Add the shortening and butter and pulse the mixture until the texture resembles coarse crumbs.  Add ice water, a little at a time, until the dough can stick together and form a ball in your hands.   Form two balls of dough.  Flatten one dough ball into a 5" disc and the other into a 4" disc.  Wrap in plastic wrap and refrigerate for at least one hour before rolling.

Meanwhile, heat oil in a large skillet over medium-high heat until smoking.  Add the rhubarb and 1/4 cup sugar and cook, stirring frequently, until the rhubarb has shed most of its liquid but is still firm, about 5 minutes.  Transfer to a large plate and refrigerate until cool.

Remove one piece of dough from fridge and roll dough on a lightly floured surface into a 12" circle.  Transfer to a 9" pie plate.  Refrigerate until needed.

Adjust an oven rack to its lowest position.  Place a baking sheet on it and heat oven to 500º.

In a small bowl, mix together 3/4 cup sugar, instant tapioca, and salt.  In a large bowl, toss together the rhubarb, strawberries, vanilla, and orange zest.  Sprinkle the sugar mixture over the top and stir to combine.  Spoon the fruit evenly into the pie crust.

Roll out the second pie dough into a 12" circle.  Place it over the filling.  Trim edges to 1/2" beyond pan lip.  Flute the edges with your fingers or use fork to seal.  Cut 8 slits in dough top.  (Alternatively, make a lattice with the dough).  Brush the top of the crust with the egg whites and sprinkle with some sugar.

Place the pie on the hot baking sheet and lower the oven temperature to 425º.  Bake until the top crust is golden, about 25 minutes.  You may want to put a rim of foil just around the outer edge to prevent over-browning.  Rotate the pie and reduce the oven temperature to 375º.  Continue baking 30-35 more minutes until the crust is deep golden brown and the juices bubble.  Cool the pie on a wire rack until room temperature, 3 to 4 hours before serving. 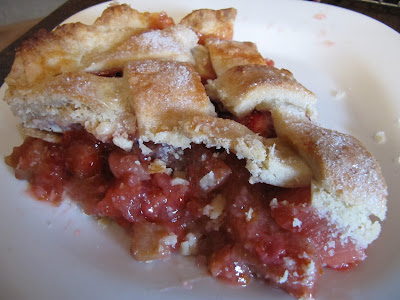 Posted by ThePharmGirl at 8:28 AM No comments: