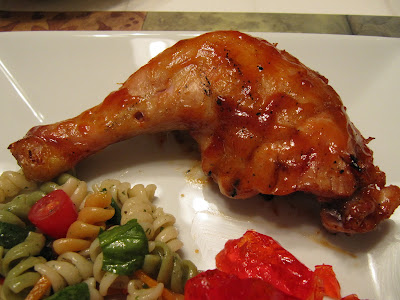 Jeremy and I wanted to grill something for dinner, so I decided on chicken.   I was going to get drumsticks or something easy like that, but no, I went ahead and bought a WHOLE chicken.  How hard could it be to cut up, right?  My first attempt at butchering a chicken was a bit comical.  I had no idea what I was doing.  I did alright getting off the wings and legs, but then I was starting to go a little "angry birds" on the poor chicken, so Jeremy stepped in and helped separate the front and back so that we could grill the breast meat too.  It didn't work so I ended up just cutting the breast meat off the bone and grilling boneless breasts and reducing the cooking time for those.

This recipe was really good.  I liked the flavor of the BBQ Sauce.  It was pretty sweet and definitely not as spicy as I thought it was going to be, but that's alright with me.  Jeremy commented, "You know you can BUY barbeque sauce, right?" to which I rolled my eyes. What would be the fun in that?!

P.S.  The pasta salad was just a Suddenly Pasta Box Mix , but I added spinach, tomatoes, and matchstick carrots to it.

Adapted from Taste Of Home Grill It! Magazine
Serves: 4

Directions:
In a large saucepan, combine everything (except chicken) to make marinade.  Bring to a boil; reduce heat and simmer for 15 minutes.

Grill chicken, covered, over medium heat for 30-40 minutes, turning several times.  Baste chicken with the marinade, turning and grilling 10 minutes longer or until juices run clear.
Posted by ThePharmGirl at 9:12 AM No comments: