18 weeks left in the year, and I'm determined to lose weight.  Combined with a love of food, this can be a tricky game to play.  So I'm currently all about portion control and including fruits and vegetables and making recipes that won't sabotage my diet.   I found this breakfast recipe in a Weight Watchers cookbook.    This entire breakfast, including the turkey sausages, was only 370 calories... not bad for a huge portion!  It definitely filled me up. 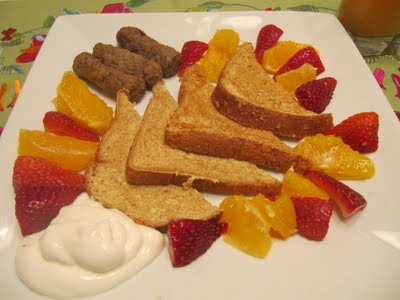 Orange French Toast from "Simply the Best" Cookbook
Makes 2 servings
250 Calories (4 WW points)
Ingredients:
1/2 cup skim milk
1/3 cup fat-free egg substitute
1 tablespoon orange zest
1 teaspoon vanilla extract
1/4 teaspoon cinnamon
4 slices low-calorie whole wheat bread
1/2 cup nonfat or lowfat vanilla Greek yogurt
1 large naval orange, cut into slices
1/2 cup sliced strawberries
Directions:
In a shallow bowl, combine milk, egg substitute, orange zest, vanilla, and cinnamon.  Dip the bread slices into the egg mixture, coating both sides and allowing the liquid to be absorbed.
Spray a nonstick skillet with cooking spray and allow it to heat.  Add the bread, 2 slices at a time, and cook until browned on one side, about 3 minutes;  turn over and cook 2 minutes longer.  Cut the French toast slices diagonally in half.  Place 4 halves on each plate;  top with the yogurt and fruit.
Posted by ThePharmGirl at 8:37 AM No comments:

The Chicken a la King and I Casserole

Recipe #3:  The Chicken a la King and I Casserole 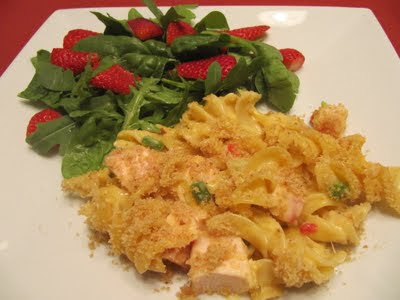 I LOVED this recipe.  It was creamy and cheesy and delicious.  I was going to add peas and maybe carrots or mushrooms for extra vegetable content, but I completely forgot.  And let's face it-- I hate mushrooms.  I ended up following the recipe except I omitted the almonds.  I froze half and baked the other.  I paired the casserole with a strawberry spinach and arugula salad.

"The Chicken A La King and I Casserole"
From Taste of Home Test Kitchen - Healthy Makeover Recipe
Yield: 8 servings (1 cup each)
306 calories

Posted by ThePharmGirl at 9:21 PM No comments: