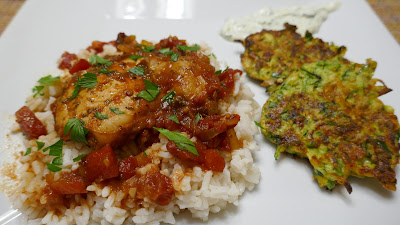 Happy Cinco de Mayo!  Jeremy wanted tacos to celebrate the Mexican holiday, but we have tacos often, so I decided to go another route.  The Chicken Adobo was tasty, just on the edge of being too spicy for me and left my lips tingling a bit from the chipotles. The rice was a nice counter-balance to that.  I realized I forgot to cut the chicken into bite-sized pieces but the recipe still worked with them as whole thighs. The zucchini fritters were good.  I liked them more than Jeremy did.  They could have used a little more seasoning overall, but the Cilantro-Lime Sauce did it a big favor. 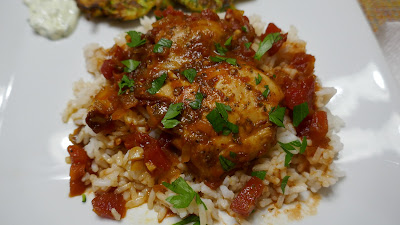 Heat 1 tablespoon oil in a large skillet over medium-high heat until just smoking.  Sear chicken until golden brown on both sides, about 3 minutes per side; transfer to a plate.

Heat remaining 1 tablespoon oil in the skillet over medium heat until shimmering.  Add onion and cook until softened, about 5 minutes.  Stir in molasses and tomatoes, and return chicken to the skillet along with any accumulated juices.    Cover, reduce heat, and simmer until chicken is fully cooked and sauce has thickened, about 10 minutes.  Season with salt and pepper to taste.  Serve chicken over rice and spoon sauce over everything.  Sprinkle with cilantro. 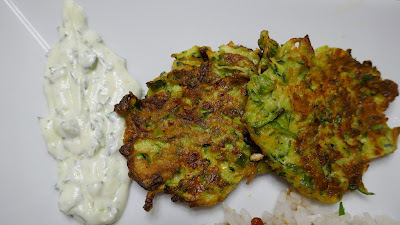 Directions:
Whisk together the sauce ingredients in a small bowl; cover and refrigerate until ready to eat.

Toss zucchini with 1 teaspoon salt and let drain in a fine-mesh strainer for 10 minutes.  Wrap zucchini in a clean dish towel and wring out excess liquid.  Transfer to a large bowl and stir in the shredded cheese, eggs, jalapeños, scallions, oregano, coriander, garlic, 1/4 teaspoon pepper, and cilantro.  Sprinkle flour over mixture and stir to incorporate.

Heat 2 tablespoons oil in a large skillet over medium heat until shimmering.  Drop 1/4 cup portions of batter into skillet and use the back of a flipper to press into ~3-inch-wide fritters.  You should be able to fit 6 fritters in one pan.  Cook until well browned and slightly crispy, about 5 minutes per side.  Repeat with remaining batter.  Season with salt and pepper to taste.  Serve warm with the cilantro-lime sauce.

Posted by ThePharmGirl at 10:15 AM No comments: