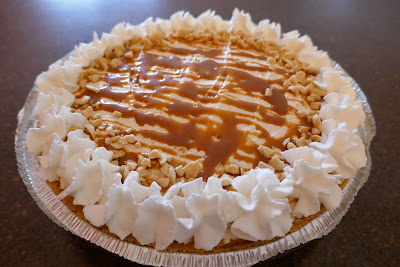 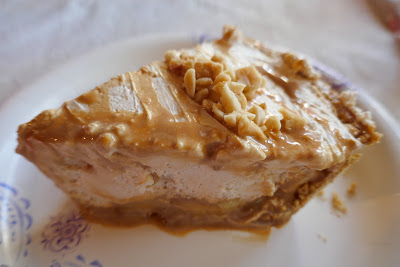 I decided to try a new recipe for Easter.  It was good, but there was a little too much caramel which was too runny in the bottom layer, making a mess in the pie plate.  I was surprised that it never set because I had refrigerated the pie for a full 24 hours.  It still tasted good though, and it was really easy to prepare.  I much prefer my other Banana Cream Pie recipe which is more of a Banana Pudding Cream Pie and I'd stick with that next time.  Still, here is the recipe for all the caramel lovers.  The only changes I made to the original recipe were using a pre-made graham cracker crust and store-bought whipped cream to save time, and those changes are reflected in the directions.

Directions:
Using a hand-held mixer, whip the cream and butter at medium speed until fluffy.  Add the powdered sugar and cinnamon, and whip at low speed until just combined.  Fold in the whipped cream.

Spread the dulce de leche over the crust and top with the sliced bananas, forming 2 layers of bananas if necessary.  Spread the whipped topping mixture over the top.  Refrigerate until set, at least 2 hours.
To serve, top the pie with a border of chopped peanuts.  Warm some dulce de leche in the microwave until melted and drizzle over the pie.

Posted by ThePharmGirl at 5:54 AM No comments: